It has been over a week since social media had a minor blow up in the realm of Christendom with megachurch pastor Andy Stanley’s disparaging remarks about families who commit to small churches. Almost everyone (except for me, until now) has responded to Stanley. Not surprisingly, Stanley issued a quick apology for this portion of his sermon.

Almost no one has defended Stanley, though some did not pay attention to the context. The context of this sermon blurb was youth ministry and Stanley’s claim that a church should have separate middle school and high school ministries. Also, his comments were directed at families with children and youth, not singles. 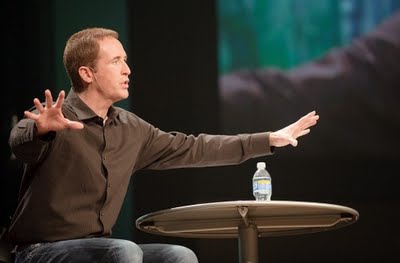 Based on this context, one might bring some concerns to Stanley’s sermon for other reasons than, “Hey! Quit picking on small churches!”

First, why should the nuclear family drive the dynamics of a local church? Does this exalt marriage over the calling of singleness? (Cue Perry Noble’s now infamous Facebook meme.) Does this make the divorced or widowed feel left out? Should those who aren’t “happy and married with 2.3 children” go to smaller churches?

While this instance of a megachurch pastor putting his foot in his mouth has allowed many small church pastors and members to blog and tweet heavy critique against megachurches in general, I am in most agreement with Trevin Wax’s balanced treatment.

Several years ago a good friend of mine (who was a youth minister and mentor to me when I was high school) decided to leave his large megachurch and plant a smaller church in another part of town. When I met with him after a couple of years of him planting the church, he told me that he was glad to have left his megachurch and that he appreciated pastoring a smaller church.

So, that settles it, right? Deep down, faithful Pastors just want to be in smaller churches. Well, I think there are plenty of small church Pastors who, deep down, wouldn’t mind the cozier gig of being in a megachurch. How do I know this? Because I’ve felt this way.

In fact, I’m pretty sure that every time I see a story about Steven Furtick’s house square footage, Mark Driscoll’s latest gaff, or Matt Chandler’s church blunders with women, I deep down wish I had their gig. I want to speak at conferences, get a six figure (or seven figure) salary, (ghost)write some books, preach, and live a pretty comfortable life.

It is pretty crummy to worry about people tithing and whether there is enough in the budget to continue paying you as a full-time pastor. It is a bummer when you as the solo pastor deal with divorces, identity politics (yup, even in the church), mental illness, oversensitivity and catastrophizing, shallowness and rugged individualism. Even being the Associate Pastor (aka not ‘the guy’) at a megachurch seems preferable.

But, these thoughts are not of faith.

In the end, I have no principled case against any particular size of a church membership roll. My main standard is whether a church of any size is able create a culture and ethos where the people are an extended spiritual family on mission rather than a mere consumer base that desires religious goods and services. This is an issue for churches of all sizes.

But, I don’t prefer my church to become a megachurch. If we grow, I’d rather multiply churches and plenty daughter churches and raise up leaders. This can be done on a larger church scale, but I do think our contemporary culture with its idols has some overlap with a particular type of megachurch that can be unhealthy and stunt discipleship. Some megachurches recognize this and make the proper faithful adjustments, but just as it is hard for a rich man to enter heaven, it is harder for megachurches to know and live out a spiritual family rhythm. Again, my megachurch pastor friends have told me such.

Thus concludes my “try to be balanced, find a third way, be vulnerable, get gospelicious” blog post on a recent evangelical sub-culture headline.