The official Blog Tour of Pete Enns’ newly released book The Evolution of Adam did not include Cosmic Christianity .  However, I finished reading the book last night after checking it out from a seminary library and thought I would make some comments.  This should not be taken as a full-length (or short-length) review, but only some initial thoughts off of a recent reading. 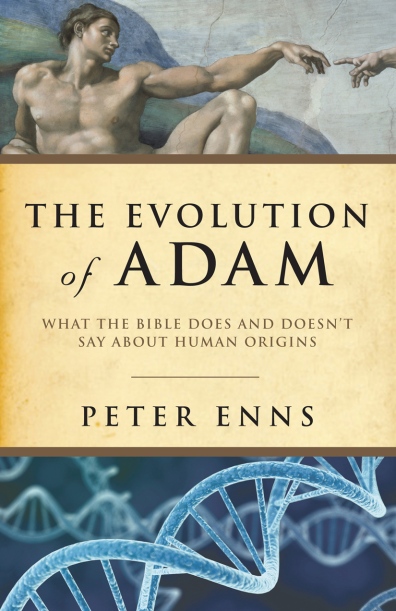 First, Enns doesn’t give his reading audience enough hermeneutical and exegetical options to make decisions for themselves.  He claims to be writing this book for evangelicals that wrestle with modern science and an infallible Bible, and we assume he would want to assist them through the murky waters of our first parents and recent findings in genetics.  Yet, after Enns gives the reader material concerning the literary genre of the Pentateuch and its literary comparison to other ANE myths, he corners one into a particular conclusion (or, at least a better conclusion than some irrational alternative).  Yet, plenty of biblical scholars who recognize the parallels between OT literature and other ANE literature acknowledge much of what Enns puts in his book, but they don’t see only two options before them (the Bible has nothing to do with ANE literature, or the Bible cares little for history when it parallels ANE literature).  John Walton, John Oswalt, Bruce Waltke, and others have shown a better and more nuanced way to handle this issue as evangelicals.  Not surprisingly, Enns does something similar in Inspiration and Incarnation where he assumes a major problem for evangelicals even though evangelicals have been thoroughly aware of the “problem” for a good while.

Second, Enns clearly has shown the implication of his work found in Inspiration and Incarnation in claiming that Paul (and, by consequence, Scripture) teaches error.  While Enns does try to soften the blow a bit by telling the reader that his exegesis of Romans 5, 1 Corinthians 15, 1 Tim 2, etc. isn’t the mainstream evangelical viewpoint and that it is a difficult conclusion to accept (even claiming that his perspective shouldn’t be the last viewpoint on the subject), there is a serious blow dealt to the doctrine of Scripture.  The nuance of inerrancy as stated all the way back to Warfield and through doctrinal statements such as Chicago is that while Scripture may contain facets that are false or immoral, it is what Scripture teaches or intends/means for the reader that is inerrant or infallible.  Yet, Enns goes against this nuance in claiming that Scripture and Paul teach a historical Adam and intend for the reader to adopt the same conclusion even though such a belief is false.

Third, in relation to my first point, Enns doesn’t give the reader the various hermeneutical paradigms by which they may interpret Scripture.  Enns’ hermeneutic is very a narrow grammatical-historical method that has little room for any notion of sensus plenior or expanded meaning intended by the divine author.  Even if Enns doesn’t give credence to such paradigms, he should do the reader a favor and lay out those various options for him/her, especially since this field has been ripe with development and a multitude of perspectives.

Finally, Enns doesn’t just lead readers astray on the doctrine of Scripture.  He also gives credence to N.T. Wright’s interpretation of the Reformation emphasis on justification and Wright’s exegesis of Pauline soteriology/ecclesiology.  Although Enns’ comments are very dated and don’t take into account the progress of the debate in recent years (see Kevin Vanhoozer’s masterful critique of Wright), this brief section is unhelpful (and even off-topic to a certain degree).

An additional thought of mine is more existential than theological.  I get the sense from Enns in his books, blogs, and statements that he is bitter and has an agenda.  I’m sure his dismissal from Westminster Theological Seminary and, essentially, from the conservative evangelical arena has been difficult.  My sinful nature would manifest itself in a more visible manner if something similar would happen to me.  However, if any sort of agenda related to the controversy over Inspiration and Incarnation is driving his current work, then I cannot recommend Enns to students and learned laypeople.  Theology should be done with both excellence in craft as well as sanctification in one’s soul.  If either is missing, I don’t recommend that person’s work.  Even if Enns provides some helpful insights, his lack of precision and his lacking a God-honoring mindset should make pastors and scholars uneasy in recommending Enns’ scholarship.  There are plenty of other resources where one might get the best Enns offers without the worst that is present in his work.