Packing Up the Dreams, God’s Planted…
The famous Michael W. Smith song which draws tears at every Christian high school graduation ceremony is now an appropriate tune for all Losties who have been captivated by American television’s most talked about series in the last decade (I started watching last December, so I am included).  Below are some brief thoughts on the finale.

I should begin by saying that I very much enjoyed the finale.  There were many teary moments (Sun-Jin, Charlie-Claire-Aaron, Suliet-Apollo Bar), as well as some “HECK YEAH!” moments (“You think you are going to destroy this island.”  “I am going to kill you.”  “That’s a surprise.”  IoW, Jack Shepherd beats out Jack Bauer).  Did anyone think about the StrongBad e-mail with the Japanese Anime when Jack was leaping off a rock with his raised fist right before the commercial break?

Most ‘professional’ Lost analysts are “emotionally satisfied” with the finale, and most fans seem to agree.  The major questions come with the final 20 minutes of the show.  I guess all those who joked, “They’re all gonna die,” weren’t far off as the flash-sideways is really not an alternate reality, but a sort of spiritual non-reality which is still real (at least, Christian Shephard told his son that they were both still real).  Many are wondering if this means that are beloved Losties died when flight 815 initially crashed, or did they die due to the incident?  I think the latter is more plausible than the former, but I still think there is a better explanation (I hesitate to call it the “true” explanation” since Cuselof would decry such words).

Christian seemed to imply that the timeline for the FS reality is relative in relation to the island timeline.  Simply put, the FS reality is occurring not before, after, or necessarily along with the Island timeline.  Rather, this timeline is transcendent.  Thus, any theory which says that Kate, Sawyer, Richard, Lapidus, and Miles must have died as soon as they flew off the island is a stretch (we are not supposed to know the fate of the “Ajira Five”).  Also, Ben and Hurley could theoretically live for hundreds of years before passing the Island on to another dynamic duo.  The purgatory-church scene remains unaffected.  (Although many wonder why Aaron the infant is there…that is a mini-head scratcher, I will admit.) 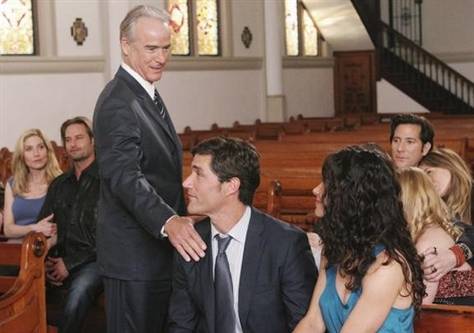 No matter how one dissects the finale, I think we all have a clear picture of what Cuselof and co. wished to communicate about Lost.  My working theory is that Lost is a portrait of the integrationist civil religion of our globalistic, postmodern world.  In a sense, Lost is both descriptive as well as a proposed prescription of what the ‘already-and-not-yet’ global community is and should be.  In a world with many schisms, dogmatics, and dividing absolutes, we need to learn how to work together and build true community from a variety of ethnic, cultural, religious, and diverse backgrounds.  And in the end, we can accomplish a momentous goal/purpose (and all go to Nirvana together).

This also ties in with our post-9/11 world.  In light of a catatrophe (a plane crash), we should all band together and defeat the epitomy of war and death (the Smoke Monster) and fight for goodness and life (the heart of the island).  And true community will eventually come about as we all end up in one, singular “church.”

For the record, I am not anti-Lost on this point (as perhaps most conservative Christians would be).  I’d rather watch a show like this since it is thoughtful and promotes authentic dialogue.  Nor am I against a type of civil religion of a global variety (civil religion is unavoidable).

What I myself would bring to the public dialogue is whether we young mosaics are in fact doing a disservice to various cultures and religious traditions in assuming that we should all ‘get along’ in every sense of the term, so that we are bound together in our ultimate religious commitments?  Such a perspective is not, contrary to popular opinion, a coherent fusion of all our belief systems, but rather it is a new religion and philosophy all together.  Plurality as description is more than acceptable, but pluralism as prescription is perhaps the ultimate intolerance.

Does the Christian perspective (not Jack’s father) offer any useful contribution?  I think so.  If Cuselof and co. wish to design the beatific vision of a global, integrated community that is devoid of violence and hatred, then perhaps the very center of the gospel, Jesus hanging on a cross, is a basis for such a community.  Think about it.  While Jesus is able to say, “Forgive them Father, for they know not what they do,” the majority of world religions or ideologies  say “Violence is answer” or “Objective truth needs to be discarded, let’s just get along.”  With Christianity, you get both a concern for truth as well as the basis for discovering truth as a community.  Violence, hatred, and intolerance are discarded because of Jesus.  Yet, we don’t need to pretend that we all get along and agree about issues of eternity just because we don’t want to be divided.  You can have both truth and community, if Christianity is true.